« Three ultra-traditional manufactures have combined 783 years of creative expertise to produce an extraordinary clock that was introduced today in Paris: Hermès, Jaeger-LeCoultre and Les Cristalleries de Saint-Louis have coproduced a unique clock that is more than that, it is an objet d’art that happens to tell the time.

While such a collaboration may seem at the very least unusual in the highly competitive luxury segment, it is indeed a coproduction very rooted in history. Les Cristalleries de Saint-Louis has been producing exquisite glassware in the Alsace region of France since 1586. Acquired in 1989, the company produces Hermès’ handcrafted crystal objects among fourteen luxurious product categories.

Hermès and Jaeger-LeCoultre collaborated from 1928 to 1972, when Hermès began offering wristwatches for sale in its famed store at No. 24 Faubourg Saint-Honoré in Paris. As it did for many well-known jewelers and brands – famously including Cartier – Jaeger-LeCoultre supplied its high-quality mechanical movements for the timepieces signed Hermès and sometimes added its own name to the dial. Thus, the two brands can boast a long and fruitful history of collaborating with one another.

The latest masterpiece in this history of alliance was unveiled today on Paris’ Place Vendôme: the Atmos Hermès Clock. Seeming to lose itself in the strands of time, the Atmos movement projects languid tranquility from within the crystalline confines of a unique glass bubble. First introduced in 1928 as a perpetuum mobile (interesting how this date coincides with that of the year Jaeger-LeCoultre began cooperating with Hermès), the Atmos differentiates itself from every other mechanical timepiece in that it literally never needs to be wound. Every time the temperature around it changes by one degree Celsius, the gas-filled capsule that acts as a bellows fanning the mainspring into action expands and contracts – literally winding it without the help of a human hand. One degree of temperature change, which is already effected when a human being simply walks through the same room, is enough to wind the mainspring for 48 hours’ worth of action. 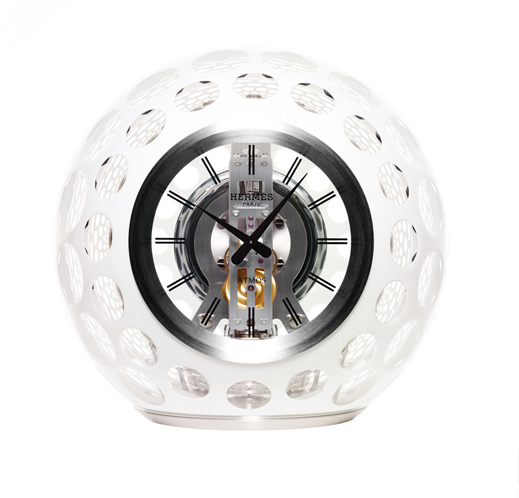 The “bubble” design of the crystal globe housing the Atmos, whose movement has remained unchanged since 1928, was inspired by the Djerba tableware line already in existence at Hermès. Weighing in at about ten kilograms (about 22 pounds), it is hand-blown and hand-cut using the excruciatingly precise technique of double overlay, which sees layers of glass coated on top of one another, including one colored layer – in this case white – after which the top two are cut away without touching the third. Only six of Saint-Louis’ master glassmakers have the skill and experience needed for the successful completion of this task.

Pierre-Alexis Dumas, artistic director of Hermès and direct descendent of founder Thierry Hermès, explained during the launch that his grandfather Robert Dumas had harbored a particular passion for the Atmos; he was fascinated by its visible perpetual machinery. Dumas’ idea for the collaboration, originally conceived by Philippe Delhotal, artistic director of La Montre Hermès, was in part to magnify the visible Atmos movement within the crystal by giving it a great many facets. “Its something Captain Nemo would have had in his ship,” Dumas said.

I’m like a child, this gives me energy,” Jaeger-LeCoultre CEO Jérôme Lambert exclaimed. “It is incredible to share this emotion with Hermès.” The Atmos Hermès Clock will be produced in a limited edition of 176 pieces – one for each year of Hermès’ existence – and sold through both Hermès and Jaeger-LeCoultre boutiques. »

From Forbes, by Elizabeth Doerr